The Numerical Reasoning part of the Aptitude Test, tests how well you can interpret tables and graphs and how fast you can do basic calculations with the data that is presented to you. Numerical Reasoning is an important part of almost every assessment and it is a category where it really pays off to practice.

For some, it might have been a while since they made math exercises in high school. We have worked out an example in which you can see which types of exercises are common in the final assessment and how you can solve them. 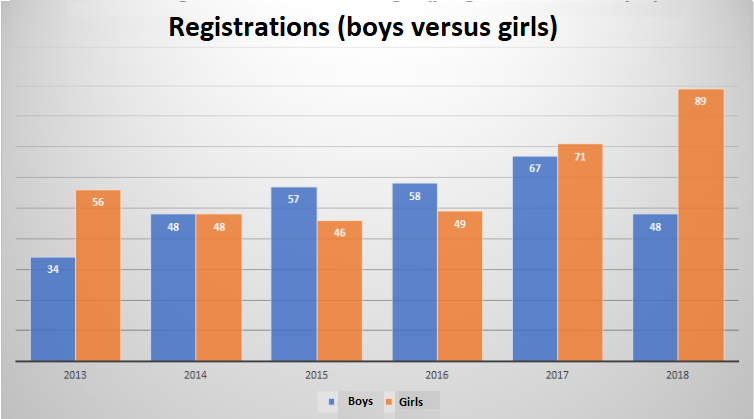 1.a What percentage of the registrations in 2015 were girls?

1.b In which year was the largest increase in total registrations?

Note that the increase in total registration is requested. So you have to add up the registrations of the boys and girls for all years. It is not about the percentage increase, but about the absolute increase.

With these kinds of questions you can often exclude a number of options before you start calculating. For example, you now see that it can actually only be between 2016 and 2017. If you look closely, you do not have to count at all with this question!

1.c What percentage more or fewer girls were registered in 2015 than boys?

Number of registrations for boys: 57

Number of registrations for girls: 46

So 10.7% fewer girls registered than boys.

This is a rounded percentage and it is not too easy to divide a girl, so the number of girls registered in 2012 is 49.

Back to numerical reasoning